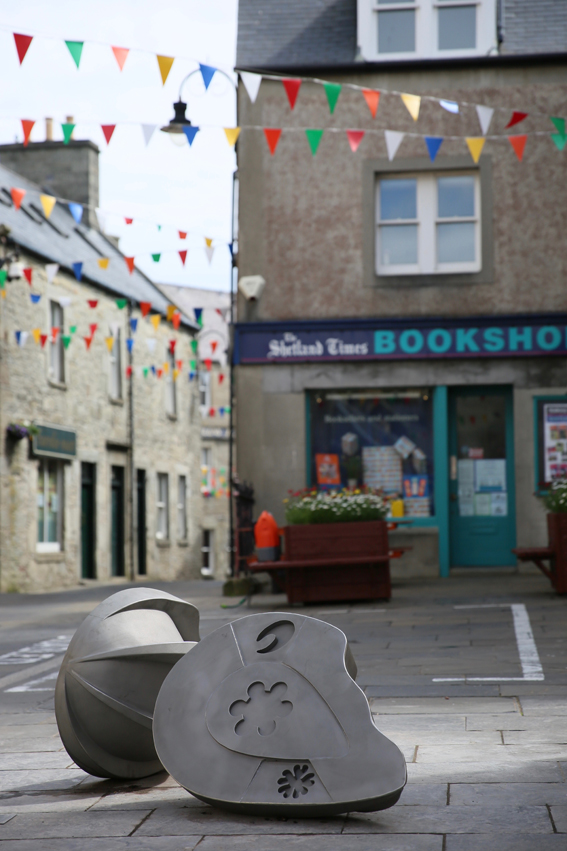 I have completed ‘Storm Cargo’, a sculpture for Lerwick, Shetland as part of the contemporary LOCUS Public Art Trail. Working with fabricators Malakoff Engineering in Lerwick, it was installed on 3rd July 2021. ‘Storm Cargo’ is made of stainless steel and consists of two halves and is broadly inspired by the shape of a guillemot’s egg. One half is more upright or ‘on its side’ and close to it, the other half is in a more prone position. The outer surfaces of the work depict tides, waves, coast and landscape, along with ’sixareen’ Shetland boat construction. The egg is sliced open to reveal a cargo of elements that make up Shetland: a Scatness wheelhouse and a hearth stone from Jarlshof, Edmonston’s chickweed from Unst and Fort Charlotte, compass navigation and marine engineering, all as deep cut symbol reliefs. The two oldest ones are cut deepest, the next two less so, and the most recent with the lightest ‘footprint’. The inner plates also angle and wedge, creating a dynamic surface reflecting the stone construction and landscape at Scatness and Jarlshof. 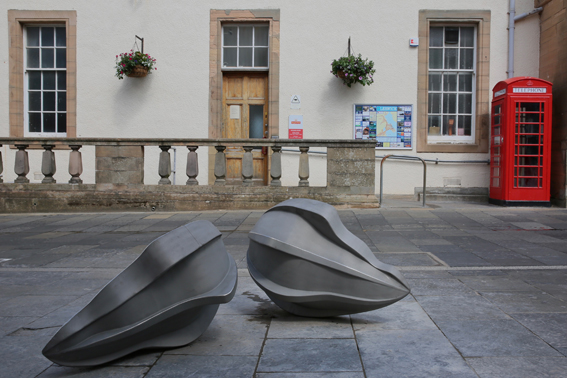 The LOCUS Public Art Trail also includes sculptures by Civic Soup, David Lemm and Kenny Hunter. In addition, two murals by Cobalt Collective and Gavin Renshaw complete the Trail sited at key locations around and interwoven into, the old centre of Lerwick. ‘Storm Cargo’ sits in a central location opposite the old post office in Lerwick’s historic Commercial Street. Commissioned by Living Lerwick, the project was funded by Shetland Islands Council via the Scottish Government’s Town Centre Fund.