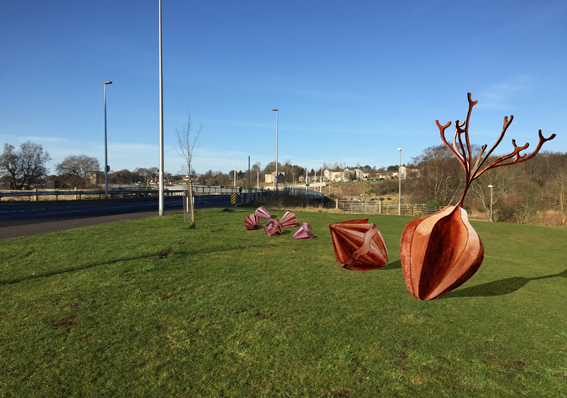 In 2021, I was invited to submit a design proposal for the Tillydrone community in Aberdeen as part of the Tillydrone Gateway Project. The proposed works are an ascending series of sculptures, from small cast iron pieces to a large Cor-ten sculpture, ranging in height from 0.42m to 3.5m. The title, The Tillydrone Tops, suggests in the sculptures a set of spinning tops, growing forms that closely reference key identifying features of Tillydrone’s social, industrial and natural history. Paper and textile mills used to be dotted along this part of the River Don, its northern edge. As such the river is an essential part of Tillydrone’s existence as the mills took their power from shuttling, spinning and weaving from water wheels powered by the river, and it is still the case today with the Hydro creating energy from the river. This sense of energy and movement is expressed in the rising series of shapes that grow up and out with a sense of new growth.